by Tragedy In Hope 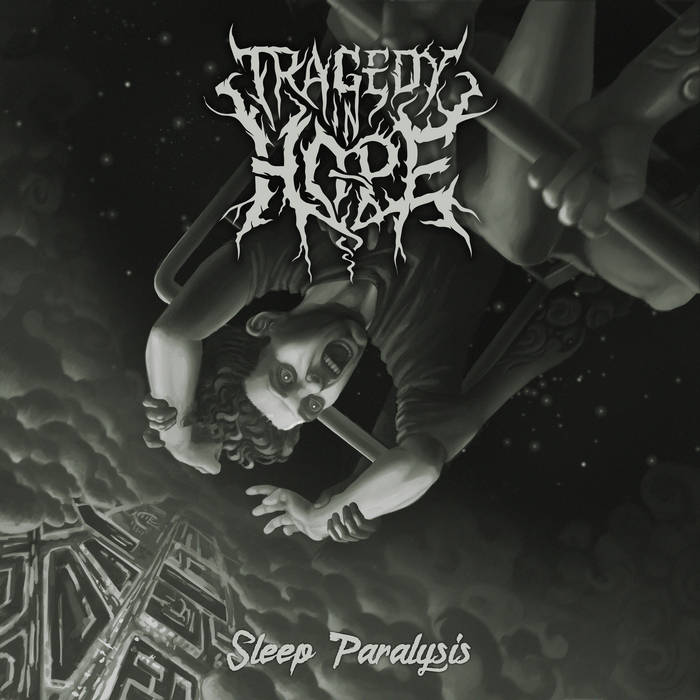 TheKenWord2017 It's rough around the edges, yes, but Sleep Paralysis is a rare gem where something cool is being done with a well-tread sound. Worth a looksee and definitely worth keeping a close eye on Tragedy in Hope. Favorite track: Winter Wedding Ceremony.

Hi! Before we get down to the synopsis, I just want to tell that the story you are going to hear isn’t only a trip across the dark dream world, but it is also the story of fighting with yourself. It’s the story about how strong you can get once you accept yourself as you are.

The story starts when the protagonist wakes up in a dream and goes to the mirror where he sees a twisted image of himself, the phantom monster of sleep paralysis.

He escapes the place, he found himself in, trying to run away from the bleak reality. He flies among white clouds trying to find a rainbow, but falls to the ground when thunderclouds and a storm come.
The world beneath the clouds is filled with rains and a piercing cold. To find a rainbow there seems to be impossible and the darkness slowly starts to swallow him as many others before. He doesn’t give up chasing it, but…

The truth is, it is him, who is the phantom monster behind the mirror. He is just the mind projection of the true protagonist, who sleeps paralysed seeing nightmares.
He tries to explain the true protagonist that they are two parts of the whole one and only if they accept each other, they both will be able to escape the dark world they are stuck in.
But when sleep paralysis finally ends, a lucid dream starts again.

"A paragon of authenticity, a project soaked in passion and foresight such that it bleeds with brilliance in every note."

"Dealing in a way that combines influences from the past with the present elements of Symphonic/Melodic Black Metal is what Tragedy In Hope is up to, and “Sleep Paralysis” shows that the band is really one of the new bands of this year."

"Don’t let the score below fool you. I like this album a lot. It’s endearing, dramatic, and earnest, compelling in many ways which make it worth my time and, by extension, yours. Sleep Paralysis simply demonstrates that Tragedy in Hope has a lot of growth left to undergo, whether it be in the lyrical structure, overall riffcraft, or the integration of symphonic flourishes. Nevertheless, Tragedy in Hope roped me in and I’m fully invested in hearing a lot more from Sasha, Dovgan’, and whoever else joins them in the years to come."