from Smile At Death by Tragedy In Hope 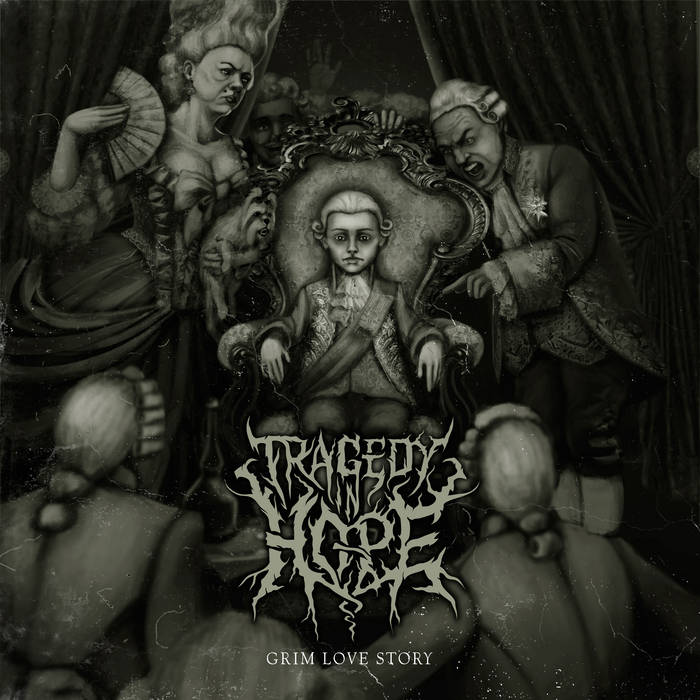 This is a story about two people, who fell in love by chance. There weren’t meant to even meet each other, because he was a prince and she was just a simple girl from a poor family.

On the first EP there was a song called “The Celebration Of Despair And Woe”. It describes the ball, when the girl was compelled to kill her beloved one to prevent him from spoiling his family honor. This song tells a story of who they were before they met each other.

They say there was a story of love,
But like others it was forgotten for long.
I hunt up it abandoned under thick sheet of dust.
So, here is how it began.

There was a boy who was born a prince
And meant to be a new king.
People around seemed friendly and kind,
But deeply inside they were haughty and vile.

F: Keep your back straight, use forks and spoons right,
Follow strict rules and don't play the fool.
M: Once you bring us to shame
You will lose everything you ever claimed, bitch.

They say there was a story of love,
But like others it was forgotten for long.
I hunt up it abandoned under thick sheet of dust.
So, here is how it began.

There was a girl who was conceived by occasion
And meant to die in a womb.
Believe it or not,
An umbilical cord was tied around her neck.

Dear mother was a local slut,
Stepfather was always drunk,
And though they loved her so bad,

She was doomed
To spend precious years of youth in a poky room
Filled by puke, piss, late evening screams, an alcohol-laden breath and fetid rats.

18 years passed.
At the night when heavy mist filled gloomy streets
They both heard a vulgar minuet of an one-handed pianist.

Before folks started to whirl in a devilish dance,
One bold young man caught their vulturine eyes.

He went to the center of the marmoreal hall
By holding a glass of champagne.
Indistinct whispers echoed off the walls
And he stately proclaimed:

"Ladies and gentlemen,
I am highly glad you've come here tonight.
Let me be honest and straight,
There is the one who has now a key to my..."

...Heart was pierced by a knife,
First screams and fright,
Then cheers and laughs,
Her tears, his blood.

This night is so damn cold...

Only hoots of owls
And howls of lonely wolves,
Gently, purely sounded,
When she was wandering through the woods.

Twisted tree branches and timid moon rays
Tried to show her the way from the embrace of this serpentine maze,
But shameless darkness
Clung to her stolen, tattered dress.

She sat on the ground
Lost, frozen and completely broken.

Fingers grew numb, all thoughts were mixed up,
There was no more pain
As life in her eyes faded away.

They continued to celebrate.
They danced on their graves,
Spread sperm on their faces,
Spat in their mouths, pissed all around.

Just as if nothing had happened
They went home and slept well.

So, did they say there was a story of love?
No, they impudently lied!
Here is what the story about.

There always were prisoners of circumstances, places and times.
Some of them play these adorable games,
While madmen are trying to break them in vain.

Though this life is tough
It's better to die for what you love,
Than choke down tears, silently shiver
And run like a coward in fear.

*Soft laugh in the woods*

from Smile At Death, released November 22, 2019
Music and lyrics by Sasha Giller.

Mixing and mastering by Vladimir Lehtinen.