Get fresh music recommendations delivered to your inbox every Friday.

The Celebration Of Despair And Woe (Demo 2018) 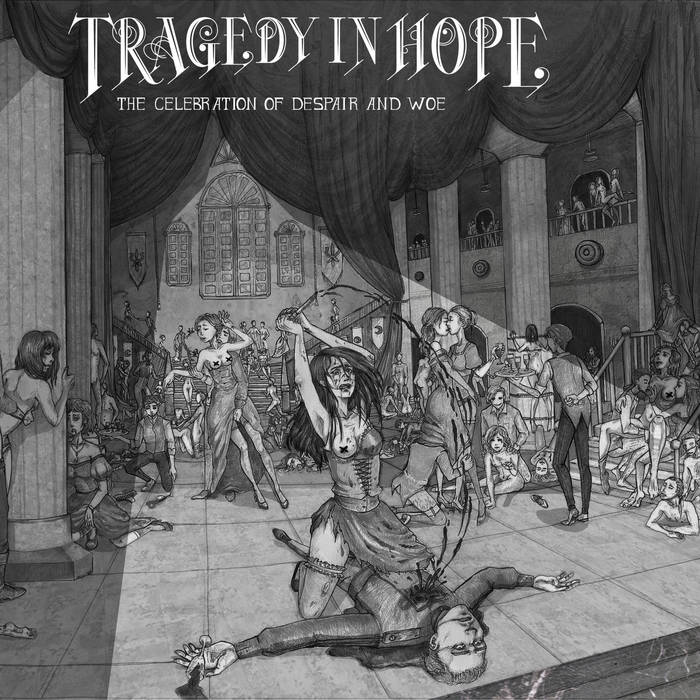 The Celebration Of Despair And Woe

How charming the ache is,
Like precious kiss in languid bliss among the moonlight's gleams.
Bewitched by the thrill.
She revels in nocturnal spree amid swank columns of ivory...

The Sorrow palace of (the?) shattered glass,
Falling tears and her mourning art,
Scalding fragrance of aphrodisiacs,
Filled the air with it's lewd witchcraft.

Whirl in lights of the dazzling masquerade,
Oppressive principles of morality fade,
Malicious tongues are weaved in grim talks,
While innocence is losing virtue.
Voluptuous lips, coquettish eyes
Dark-red attire, necklace, silk tights.
Her touch is a thorn for she was forlorn
As guests was embraced by desire and vice.

The merciful gift of an affection adieu,
Humble lady was defiled, abused, allured
She was sepulchered
Under the weight of secret love
Terrible truth should've had to bow,
But on the edge of tragedy
Her desperate action made him free.

"Fly to the fair paradise
Indelible shame and dishonor demised",
If together they were like patrician and whore
Then a confession would be a doom.
All dreams disappeared in cries of her dear,
Ripple of laughter and mockery after,
One quivering voice through malevolent joy,
Caws of mirk crows, sharp and curved claws.

Gossips that tickle the curious minds
Courteously crawl in souls of all kind.
Sweet flattery caused a blush on the young face,
After two days she was found, cut veins.

In anticipation of the scarlet sunset,
She learned to dance a vulgar minuet.
Cautiously entered a sumptuous hall,
Dirty, wet thoughts became a hypocritical role.

Like yellow leafs on a weeping willow
Algid hearts blaze in an ecstasy.
Amused by spellbinding Eros
She engendered sick fantasies.

The piercing wail in the mist
Then muffled moan, mains on wrists
Chill winds whisper - "she is missed"
In woods beneath blood moon eclipse.
A faint sight, she was the bride
Who killed her lover this solemn night,
Compelled to save him from disgrace
She strays in a maze of myriad ways.

He met her in a theatre.
A curtsy for the noble,
A quaint wink for the girl,
They fell in love like no one fell and no one loved before.

Secret meetings at the lake
They hid from eyes of thousands snakes.
This promise will never be broken.

Under tall trees he got down on knee:
- Mannerly asked for my hand.
He pulled out the ring, it glaringly blinked:
- Bewildered and glad i agreed.

- Soon will be ball, i should tell them all.
- But you will be stained for the rest of your life...
- I'm ready to lose my noble pride.
- I can't let them cover you in a mournful pall.

Under sneers of sluts and knaves
They were buried in the nameless graves
And softly echoed someone's laugh in woods...
The celebration of despair and woe!

Enchanting sounds of violins
Should've had to play a funeral theme
Instead of a dissolute symphony.
Haughty grins and broken dream
Followed two lovers in their farewell hours.